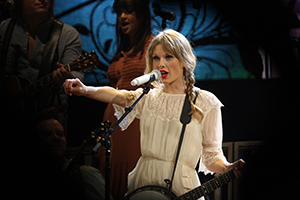 Mueller claimed that Swift falsely accused him of sexual assault and as a result cost him his career.

Swift said that Mueller put his hand up her dress and grabbed her bare bottom as she posed for a photo with him before a concert in Denver in 2013.

Mueller was subsequently fired from the Denver radio station he worked for. He sued Swift in 2015, seeking $260,000 in lost wages and a total of $3 million in damages.

Swift countersued for assault and battery.

At the trial, Swift told the jury, “I’m being blamed for the unfortunate events of his life that are a product of his decisions. Not mine,” according to the New York Times.

During the trial, Mueller’s lawyer asked why in the photos the hem of her skirt doesn’t appear to be pushed up in the front.

“Because my ass is located on the back of my body,” Swift replied.

Mueller’s lawyer asked why she didn’t respond immediately. She replied that she didn’t want to ruin the evening for her fans, and waited until she had greeted others in line before complaining about Mueller.

Back to the Wall

Although Swift’s back was to a wall, and no one else directly witnessed the groping, Swift’s photographer, who has taken 20,000 pictures of her, testified that she had never before seen Swift react the way she did after the Mueller picture.

Swift’s mother testified that when she walked into her daughter’s dressing room right after the photo shoot, she could see from her face that something was wrong.

Swift was able to identify Mueller in the picture as the man who had groped her.

The night of the concert, Mueller was approached by a member of Swift’s security team who accused Mueller of grabbing Swift’s bottom. Mueller was then escorted to the exit.

Swift’s manager approached Mueller’s radio station to complain about the assault. Mueller was fired two days after the concert.

Mueller was also banned for life from attending Swift’s concerts.

The judge dismissed Mueller’s complaint against Swift even before the jury deliberated, finding that there was insufficient evidence that she had lied about the assault.

The jury concluded that Mueller had committed assault and battery and awarded Swift the $1 in compensation she had requested.

Swift stated that she didn’t want to bankrupt Mueller by seeking a large amount of money, but she saw the award as symbolic to show that women could be free to report assaults without fear of lawsuits from the men they accused.

The Times reported that a 10-year-old fan who attended every day of the trial said that she would like to thank Swift “for standing up for me and for other women across the board.”