How Jeff Sessions will Shape Policy as Attorney General 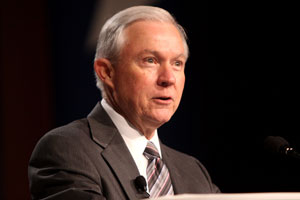 The policy mandate and potential impact of an upcoming Donald Trump presidency continues to take shape as the unconventional president-elect announces his intended selections for important federal positions. The nation received clarity on the upcoming legal landscape when Mr. Trump announced longtime Senator Jeff Sessions as his pick for Attorney General

Sessions has earned a divisive reputation during his time in federal government, and his appointment could have a particularly powerful impact on two key areas of domestic policy: immigration and marijuana legalization.

Donald Trump informed the media that he would select Sen. Jeff Sessions (R – Ala.) as his attorney general when he takes office next year. Sessions is a hard-line conservative who served as Alabama’s Attorney General before taking office as a U.S. Senator in 1996. Sessions is one of the most staunchly conservative senators in Congress, and has consistently voted Republican throughout his tenure as a public servant. Sessions has openly opposed illegal immigration and gay marriage, while supporting the war on drugs and other strictly conservative policies.

This is not Sessions’ first foray into the national judiciary — he was appointed by President Ronald Reagan as US Attorney for the Southern District of Alabama in 1981 before being nominated to serve as a federal judge in the same district by Reagan in 1986. Sessions’ appointment to a federal judgeship was stalled, however, when allegations of racism and nationalism convinced the Senate Judiciary Committee to block his appointment. Notably, Sessions was accused of calling the ACLU and the NAACP “un-American” and was quoted as saying he thought the Ku Klux Klan was “OK until I found out they smoked pot.” Sessions remains one of few judicial nominations unable to survive the Senate Judiciary Committee.

After his rejection, Sessions returned to Alabama where he served as Attorney General before beginning a long senatorial career. Despite his checkered past with minorities — particularly African Americans — Sessions’ appointment to the US Attorney General position will go through without incident, setting the tone for a strict conservative agenda from the Department of Justice.

One area where Sessions will have a notable, and perhaps immediate, impact is immigration. Deporting illegal immigrants — particularly “bad hombres” — has been integral to Trump’s platform throughout his unexpected rise to the presidency, and Sen. Sessions will willingly be the instrument of federal power used to seek out and deport the population Trump targeted during the campaign. Throughout his Senate career, Sessions has strongly opposed illegal immigration and demanded increased security on the federal border. Because the DOJ is tasked with enforcement of immigration laws, Sessions will have a great deal of authority in implementing immigration policy at Trump’s behest.

Should Sessions and Trump decide to take a stand against undocumented aliens in the country, it will mark a complete departure from President Obama’s controversial 2014 directive which ordered the DOJ to cease a significant majority of deportation prosecutions. Obama earned significant criticism from the legal community for unilaterally executing a policy of amnesty, and Republicans like Jeff Sessions strongly opposed the president’s decision to provide undocumented immigrants the opportunity to stay in the country. Sessions is openly opposed to any pathway to citizenship for illegal immigrants, and will change the DOJ’s immigration enforcement policy when he takes over.

Although not the focal point of Sessions’ appointment to AG, the future of the federal government’s approach to the trend of marijuana legalization will be an interesting development. Sessions is strongly opposed to social acceptance of marijuana, having gone on record in April as saying it is important that US policy “send that message with clarity that good people don’t smoke marijuana.” Coming from the Nancy Reagan school of drug policy, Sessions supports the war on drugs and continued prosecution of marijuana-related crimes, however, he will face a stiff challenge should he attempt to take on legalization.

For what it is worth, Donald Trump has gone on record as saying legalization should be an issue for the states, although his conservative supporters may encourage him to shift that particular stance during the next four years. More challenging for anti-legalization advocates is the logistics of taking on a multi-billion dollar industry which has taken root in 8 states, including powerful ones like California and Massachusetts. The economics of marijuana legalization will likely appeal to more states in the coming election cycle, which may handcuff Sessions’ ability to act on his clearly stated beliefs. That said, Sessions will likely attempt to replace the Cole memo — the 2014 document issued under AG Eric Holder which states the DOJ will not prosecute legalized marijuana operations — and find opportunities to discourage the spread of legalization wherever possible.

Beyond immigration and marijuana legalization, Sessions will likely attempt to exert a more traditional conservative agenda on a number of social issues, notably the expansion of LGBT rights. Although Sessions will be unable to criminalize gay marriage — which he opposes — he will be unlikely to expand civil rights for the LGBT community during his tenure.  Advocates of a liberal social agenda are likely to oppose Sessions throughout his tenure, setting up an interesting legal battle between a staunch ideological conservative and an increasingly liberal judiciary.